Diocesan President is named Penicuik Citizen of the Year 2010

Angela Sibley was recognised by Penicuik Community Council for her service to the local community and beyond in a ceremony on 22nd May 2010.  Full story..

Bishop Brian and his wife Lissa were admitted to MU Membership by the Diocesan Chaplain, Rev'd Jennifer Edie at the Lady Day Service in Edinburgh on Saturday March 27th. Bishop Brian celebrated and presided at this service and commissioned the new Office bearers. 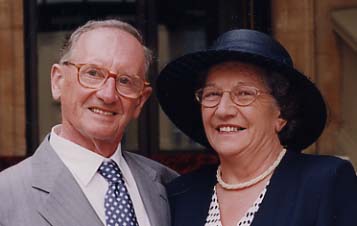 There is sad news from Doris Bilton, whose husband Alan died at 8am on 11th January 2010.  There will be a private cremation on Wednesday 27th January 2010 followed by a Service of Thanksgiving in their local village church.

Alan was  the Inspector of Mines and quarries for the whole of Scotland from 1972 - 1986.  He had suffered with Alzheimers and arthritis for a number of years. Many people will remember them from their Edinburgh days before they moved south to a flat attached to their daughter's house.   Alan was very supportive of the Mothers' Union and Doris' work in the church.

Doris served as one of the 6 Central Vice-Presidents of MU at Mary Sumner House in the days before the post of Provincial President of MU in Scotland was created. Doris was also a Past Diocesan President of MU in Edinburgh and active as a MU speaker, on Synod and much involved in the election of Bishop Brian, and also Leith Old People's welfare.  She was made an MBE in 1998.

Please keep Doris in your prayers.

Rosemary Kempsell was in Edinburgh as part of her tour of Scotland in May 2009.  Joyce Black joined her for lunch at the home of the Bishop of Edinburgh.   Read Joyce’s report by clicking here....

A new branch has been formed at St Ninian’s, Comely Bank in Edinburgh.  The first meeting will take place at 2pm on Monday 20th April 2009 when the Rector, Revd Andrew Bain, will give a talk entitled Introducing the Mothers’ Union Worldwide.

World Day of Prayer in Penicuik 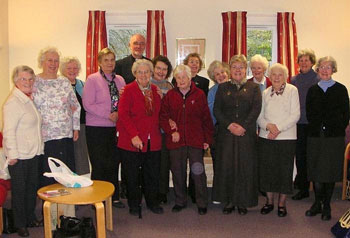 The quiet day was led by Tim Morris, Edinburgh Diocesan Chaplain.  Here he is with the members who attended.