The Retreat, held from Tuesday 25th to Thursday 27th March 2014, was led by Revd. Celia Matthews, from St Ninian's Cathedral, Perth. Her theme was Praying Through Our Senses.

The first sense considered was that of the EYES & SEEING – God be in my eyes and in my looking.

Each retreatant was given two postcards showing different scenes. We were asked to chose one of the cards and contemplate what we felt God was saying to us in that picture. One of my cards showed a tempestuous sea under a very dark angry sky; it was a beautiful day outside, so in preference to this stormy scene I chose the other card. This showed a reproduction of a painting of what appeared to be the sunny corner of a room, where there was a large vase of flowers on the table and beside it a simple wooden chair with a comfortable-looking cushion on it. An opened book had been left on the cushion. The carpet was colourful with what looked like a puppy in its cheerful unstructured design. It looked relaxed and friendly except for one strange feature – a thick black vertical line at the extreme right of the work, which jarred with the colourful brightness of the main part of the work; this effect was heightened by the fact that the black line was straight whereas the main part of the painting was full of curved lines and the composition was informal in style. The work raised other questions too – What was the book that was being read? Why had the reader left? Where had the reader gone?, and so on.

In the card one could see the glorious abandon in creation, its colours and shapes – marred by the ‘black line’ evil sin has introduced, but also there came across the knowledge that the darkness was to be overcome; though we are aware of the ‘blackness’ it is not to be feared. Looking at the work reminded us how valuable looking at something really properly, rather than casually, can be – similar perhaps to what Jesus meant when He said ‘consider the lilies of the field’.

The second sense discussed was that of FEELING – God be in my hands and in my feeling.

We were told to close our eyes, to sit with open hands on our laps; a different object was gently placed into each pair of waiting hands. Having been told that handling would not spoil our object, we were asked to examine it, eyes still closed, and then, again, to listen to what God was saying to us through it. To the many who respond to symbolism, there was a sense of peace in this quiet sitting and waiting, reminding us of so many familiar references – ‘my soul waiteth upon God’ [Psalm 62 KJV], ‘I waited patiently for the Lord’ [Ps.40:1] and so many similar words in both O.T. and N.T. How hard it often is to do this in the busy-ness of our daily life!

My object was a box ox matches: I was vividly reminded of a hymn of dedication sung first some fifty or so years ago, where the Holy Spirit is asked to:

‘Kindle a flame of sacred love

On the mean altar of my heart.

There let it for Thy glory bum

This came as a very real challenge to me and stressed the need to spend more time listening to God. I felt the need for the flame to be stirred to new life within me. Many had the opportunity to describe how God had indeed spoken to them too as they felt the object in their hands; these and our earlier conversations made it an unusual ‘silent’ retreat for many of us — but one which demanded our commitment to its themes.

THE EARS & HEARING — God be in my ears and in my listening.

We were asked to sit with our eyes closed and to listen. Various recorded sounds were played to us, and these included birds’ song, some beautiful Russian orthodox choral music, some Mozart — and ended with the insistent discordant ringing of an alarm clock! It is probably true to say that God had spoken to most of us in music — perhaps the words in a hymn, an oratorio or any other part of the rich heritage we have in music from so many parts of the world. The alarm clock recalled for me the beautiful morning collect where say to God ‘... we ask you for the joy of spending this day in your service’.

There was only a very short time to do little more than mention the prayers ‘God be in my head’, ‘God be in my mouth and in my speaking’, and [God be] ‘in my understanding'. These were themes for us to think prayerfully about as we returned to our normal pattern of life.

A most stimulating, encouraging, challenging and inspiring retreat!

(Thank you to Barbara for sharing her thoughts on the Retreat) 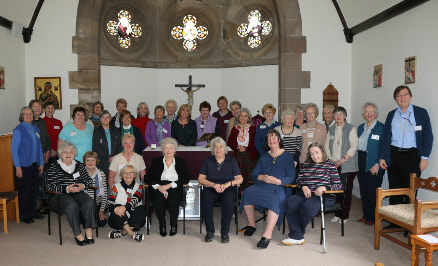