By Mothers’ Union and other Organisations

Our representative this committee is Hilary Moran.

What is our aim? We are about raising awareness within our faith communities and elsewhere of domestic abuse, challenging preconceptions and standing together as people of God with those who are abused.

What do we do? At present we are raising awareness with a shoe exhibition ‘Souls of our Shoes’. We have approx. 70 pairs, each with a caption mostly from those who are survivors of abuse, but also from those from faith communities and politicians.

It has been held in many places in Scotland such as the Scottish Parliament Edinburgh, St Mungo Museum Glasgow, Scottish Episcopal Cathedrals of Glasgow and Edinburgh and many smaller churches and shop windows. We have been at several events and conferences such as the Mothers’ Union conference and ‘Heart and Soul’ Church of Scotland event Princess Street, Edniburgh. 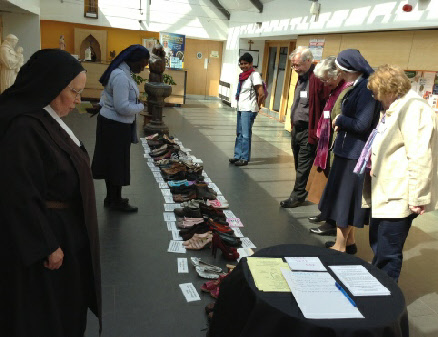 Latest venture. We have taken the shoes into one senior school (below) and had a very good response. Following from this with feedback we have developed a leaflet and have ideas on how, using the exhibition, it can be used to the fullest in a school situation. We have also taken it into two prisons in Scotland along with giving workshops for both prison officers and offenders We received great feedback from both prisons, but we can no longer go to any other prisons as they are looking at reviewing their own training on this subject. 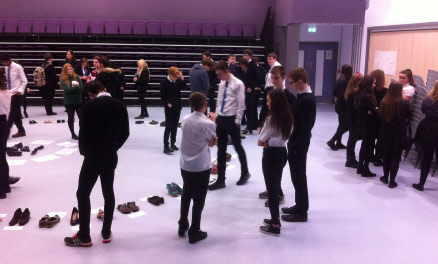 Further information from our website ifgoda.org.uk We have the physical shoes and a photographic shoe exhibition which can be sent anywhere in the country at a fair price by courier now. We just ask for the cost of transport to be met by those borrowing the shoes. 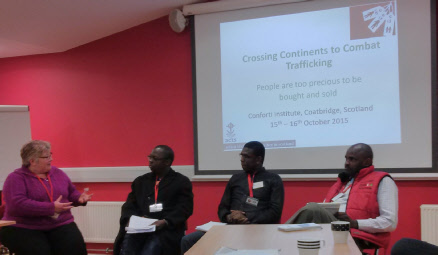 Hilary Moran was recently invited by the Action for Churches Together Scotland (ACTS) Anti-Human Trafficking group to attend a symposium and conference they had organised to discuss what can be and is being done to combat human trafficking.

The opening address at the symposium was given by Dr. Aidan McQuade, who is the director of the organisation Anti-slavery International; he also gave the key note address at the conference. Matthew Ross chair of ACTS chaired some of the sessions. Jonathan Roberts from the Salvation Army led a reflection at the conference on ‘Why should we care about human trafficking’.

We also looked at why there are so few prosecutions despite many countries having human trafficking legislation. 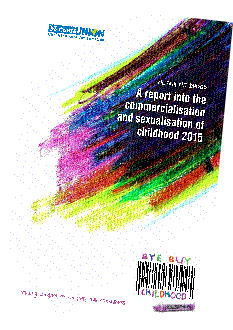 In March 2015, Mother’s Union has published the latest report about the Bye Buy Childhood Campaign.  The 2015 report highlights new research findings, along with the results of in-depth interviews with a number of parents, and calls for continued support for and investment in this area from government.

Over the past decade, Mothers’ Union has played a significant role in speaking out against the commercialisation and sexualisation of childhood, and the impact it can have on children and their families.  Whilst progress has been made in this area, there is evidence that advertising and marketing continue to be the backdrop to the lives of children and young people with spending on all marketing and advertising in the UK having risen steadily over the past 14 years.

Click here to download the campaign report and the supporting engagement pack. The link takes you to the Bye Buy Campaign website where you can learn more about the campaign as well as accessing the resources mentioned above.

Click here to find out more about the campaign

"Souls of Our Shoes" 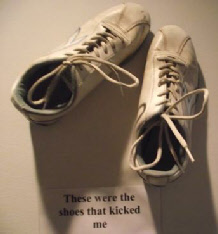 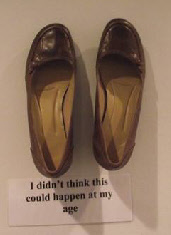 The shoes in this exhibition speak on behalf of abused individuals who suffer and some who die at the hands of their partner. Other comments come from those who journey with them. Their reflections represent a faith perspective.

“It is God's intention for all human beings, male, female, child and adult, to enjoy safety, freedom, dignity and fullness of life. Abuse in the home is a violation of God's wish for humanity as it can adversely affect an individual's relationship with God and also creates substantial damage in the family, in the community and in society as a whole.” (From the Inter-Faith Statement)

With timely help, many can escape from their abusive situation, rebuild their confidence and live in safety.

This exhibition has been adapted from the '104 pairs of shoes' initiated by the YWCA. It is now available in two versions. One is an exhibition of shoes and the other a picture exhibition, which may be more suitable for a small venue.

The Scottish Womens’ Aid website has resources supporting the campaign against domestic abuse.

The resources page of this website is well worth a look. Some of our branches hold events during the 16 days of Activism on Violence Against Women (25th November – 8th December each year). 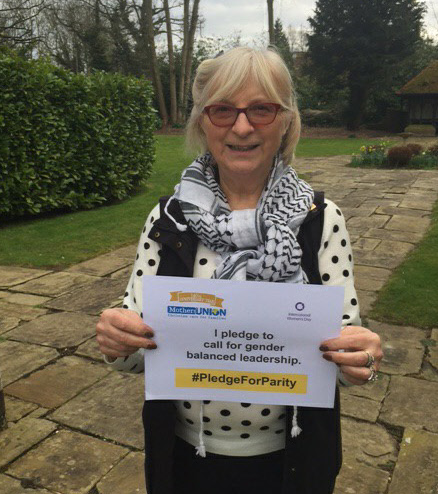 Jean Richardson, Provincial President, with one of the pledges from the 16 Days of Activism